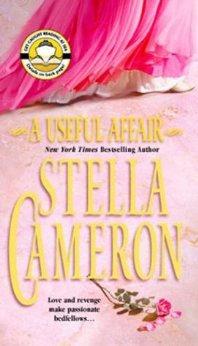 The Marquis of Granville’s deadly efficiency makes him invaluable to the Crown. But his latest mission has nothing to do with his work for England and everything to do with avenging the murder of two members of his family. Killing would be too good for Bernard Leggit, the wealthy and corrupt merchant responsible for their deaths. Granville has a better plan: Seduce the old man’s young wife, Hattie, then let society know about their affair. For Leggit, living with shame will be worse than death.

Hattie Leggit married her odious husband in a devil’s bargain to save her parents from debtors’ prison. She has a scheme for freeing herself from this private misery, but foiling Leggit is taking too long. The opportune arrival of the dashing Marquis of Granville inspires a daring new plan: Pretend to engage in a very discreet affair with Granville and make her freedom the price for not flaunting their liaison in society.

When Hattie responds to him, Granville smells his revenge, but nothing goes as he had planned. Hattie drives him wild with need, until he finds himself forgetting his purpose. Although desire is new to Hattie, she manages to resist surrender—until love and yearning conquer all doubts. But will they join forces in time to outwit a vicious enemy with more murder in mind?