An Angel in Time – Excerpt 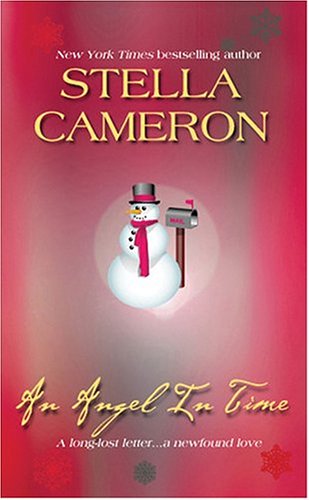 Hannah heard her name and peered through driving snow. An elderly man waited, smiling, by the front door to her apartment building.

"That’s me." Puffing into the scarf she had wrapped around her nose and mouth, she grasped a slippery iron railing and scuffed up the steps.

"A lucky day," the man said, rocking to the square toes of his old-fashioned black boots and back onto his heels. "A very lucky day."

Lucky? So far today she’d lost her secretarial job and been jilted. Well, not exactly jilted. After two years, good old reliable John Norris had told her they shouldn’t see each other for a while, that they should date other people to see how strong their bond really was. To Hannah that felt remarkably like a polite way of saying goodbye.

She gained a precarious foothold on the marble top step and took a closer look at her visitor. Clear, kind gray eyes, too young for his face, met her gaze squarely from beneath the rakishly dipped brim of a gray Stetson with a corded band. Hannah thought fleetingly of Confederate uniforms.

"Not the best of days, if I may say so, ma’am." Bushy white brows, a luxuriant mustache and beard covered much of his face.

"It stinks," Hannah said grimly. Usually she loved snow, particularly in November with the hope of a white Christmas to follow.

Hannah swept snow from her lashes. There was something about him…

"I’ve been waiting for you, ma’am," he said, working an envelope from the pocket of the high-buttoned black jacket he wore beneath an oddly long and voluminous gray cape, which looked as if it might be intended for horseback riding in bad weather. A second flap of fabric fell over his shoulders, and Hannah saw with amusement that a stiff collar, held in place by a dark cravat, rose to his jaw. Like a man from another century.

His shaggy brows drew together in a quizzical frown. "Is my arrival inconvenient?"

She realized she’d been staring and pulled the scarf beneath her chin to smile. "Not at all. I’ve won something, right? Or you’re delivering flowers from several admirers. No, no—Miss Universe has been asked to step down and only I can fill her swimsuit."

He shook his head slowly but smiled more broadly. "Does a man a passel of good to hear high spirits from a beautiful young lady." He handed her the envelope and bowed again. "I’m mighty glad I found you. I thought you might be waitin’ for this."

Hannah stopped smiling. The accent was soft and unmistakably Georgian, a male echo of her own. And on this "lucky" November day in cold Chicago, the voice from home was enough to drown her in nostalgia. Studying the man, she took the envelope. "You’re from Georgia."

"Where in Georgia?" Hannah ripped open the yellowed envelope and barely caught some sort of ticket that slipped from the folded sheet of paper she pulled out.

"Here and there," the man said, but she’d have sworn he knew her home country, the lush flat land of the state’s south, very well. Back there on this early November day, traces of an overnight frost might linger, but chances were the weather was mild enough to make a walk through still-green fields a pleasure.

She unfolded the sheet of paper and read.

Hannah stopped breathing. She raised her face to find the man watching her, unsmiling now, a distant look in his eyes. He reminded her… She made herself continue reading:

I love you, Hannah. There isn’t anyone else for me but you. There never could be. I’ve tried to find a phone number for you in Chicago.

There’s no listing. I managed to get the PO Box address from Donna at the post office. Hannah, I can’t believe this has happened to us. I got back to Clarkesville a week early, only to find you and your mother had left two days before.

I’m grateful to your mother for the note, but I can’t do what she asks. Not trying to contact you is impossible.

My father’s very ill, and you know how things are here on the farm, otherwise I’d be tearing Chicago apart looking for you. But perhaps it’s just as well. We’re going to need to be a little careful with money if we’re going to try to buy Harmony.

Come home, please. We have a date on Christmas Eve. Four o’clock in the walled garden at Harmony. Remember? I told you I’d have a question to ask then.

Use the bus ticket, Hannah. Please. I’ll be waiting in the garden.

I love you, Roman.

P.S. Today I thought about us from the beginning, about how we met when you were a scrawny kid with brown eyes that were too big. You had too many freckles and too much shiny brown hair you couldn’t braid properly.

I thought about how you delivered papers in that awful old truck. Do you remember that, too, Hannah? Those mornings when I waited for you and came along to help out? You were all skinny arms and long tanned legs, but you had a way about you that kept me sneaking out to the road every day. We had to be careful our parents didn’t find out because they might say an eighteen-year-old boy had no business spending time with a fifteen-year-old girl. I always told you I was just being kind to a little kid with too much to do, but I loved you then, too. That’s something I never did tell you.

The bus ticket’s open, so you can come when it’s most convenient. Make it real soon. I need you. R.

With shaking fingers, Hannah turned the envelope over again. Her heart pounded, and she blinked to clear her fuzzy vision. The postmark was indistinct, smudged from handling. Scrawled across the bottom in a hand that was unmistakable as her mother’s were the words: "Moved. No forwarding address. Return to sender."

And with those words her mother had taken the most important choice of Hannah’s life out of her hands. She swallowed acid. A physical blow couldn’t have shocked her more. But her mother had been trying to protect her. That was something Hannah mustn’t forget, regardless of how wrong the action might have been.

"How…how did you find me from this?"

When she glanced up, the man was at the bottom of the steps. He turned his face up toward her. Failing light and the snow obscured his features. "Like I told you. It’s a lucky day." His voice seemed fainter, like the end of an echo. "It’s a lucky day. I did a little fancy footwork, put a few things together, and here you were. Enjoy your trip."

"Mmm?" Hannah had started rereading. No, she hadn’t forgotten the date in the garden, any more than she would ever forget Roman Hunter.

Enjoy your trip? "How did you know…" The man had left. Clutching the railing, she went to the bottom of the steps. "Where did you find this?" She searched in either direction. Despite the snowfall, she could see to both corners of the short block.

He’d gone. Disappeared. Hannah screwed up her eyes to locate his footsteps. Nothing. As if he’d never existed… Now she was getting fanciful. The snow must have filled in his footprints. But he’d reminded her of someone. She couldn’t remember who—not that it mattered. Lots of people looked like other people.

Slowly she let herself into the apartment her mother and new stepfather had insisted on giving her before their departure for Denver a month ago. Hannah had lived here with her mother since they’d left Clarkesville.