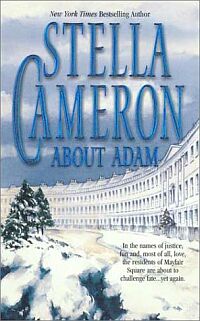 The trouble with the people at 7 Mayfair Square is that they are alive.

There is no doubt that bodies, the bones and blood, the mortal mind, the so-called heart and other various bits and pieces get in the way of good, solidly disconnected logic. It’s all that and the wretched feelings they swear by that may scuttle the sensible plans of a superior being like yours truly. Nevertheless, I must say that being a ghost can be more than it is cracked up to be.

My word, I almost forgot to tell you that I am the late Sir Septimus Spivey, esteemed architect knighted for his worldly accomplishments, the crowning glory of which was my family home at Number 7 Mayfair Square.

Desperation at the possible misuse of my masterpiece forced me to hang around in mortal form until I was 102! 102, I tell you, when I was perfectly ready to commence my path to heaven a good ten years earlier. If my family hadn’t shown themselves incapable of keeping my house in the manner to which it deserved to be accustomed, I should not have wasted those extra years trying to guide my ungrateful progeny. I rarely complain, but this delay put me considerably behind in angel school and it has only been through diligent work that I have made sterling progress—much to the annoyance of my "friend," William Shakespeare and one or two others I won’t bore you with now.

That’s history and I only mention it to let you know that since you will be supporting me in my current endeavor, you are on the side of right.

You’ll be meeting the former Misses Smiles who used to rent 7B Mayfair Square–the second floor. Below the Smiles, Latimer More and his sister, Finch, had 7A, and the third floor—for reasons only my granddaughter Lady Hester Bingham could explain—became her home and known as 7. Hunter Lloyd, her nephew, lived on the same floor and that oaf of a painter, Adam Chillworth was, and is, in residence at 7C as they call it. An attic by any other name is still an attic to me and that’s where that frequently silent, oppressive north countryman continues to live.

I had no intention of boring you with too much information but why not bring you up to date on the happenings of recent years within the walls of my house.

As I planned, Finch More married Ross, Viscount Kilrood, a scotsman who owns Number 8 Mayfair Square, in addition to considerable Scottish holdings. They divide their time between the London house and the Scottish estate.

Meg Smiles of 7B designed an audacious plan and snared Jean-Marc, Count Etranger, the vulgarly wealthy son of Prince Georges, ruler of Mont Nuages, a principality on the border between France and Germany. They own Number 17 Mayfair Square and a home at Windsor. That little arrangement wasn’t quite what I had in mind but it worked well enough.

Meg’s sister, Sybil, was as besotted with Hester’s nephew, Hunter Lloyd, just as he was with her and since their marriage this has remained sickeningly true. Hunter, a barrister, was knighted for services to George IV—that almost came to a nasty pass. A Cornish holding and considerable money came with the knighthood. The holding is small but nice enough. However, the boy insists on spending a good deal of time at Number Seven and Sibyl is as attached to Lady Hester as he is. Their little boy doesn’t lessen the confusion about the place, even if more rooms have been made over for the family.

Drat, I knew I should get a headache—an ache in the region where my head once was, that is—if I tried to make you aware of the way things are and how they became so.

That leaves Latimer More, Finch’s, now Viscountess Kilrood’s brother. I got lucky there. The unthinkable actually worked out and he settled on a pauper, an orphan from the most degrading beginnings, as his wife. Jenny O’Brien was . . . well, I must be charitable. Jenny knew she had no rightful place in the polite world and did her best to make that rattle Latimer see the truth. He didn’t and they’re married. The only good part of that arrangement is that they now live at Number Eight, Ross and Finch’s house, where they have a handsome suite of rooms and seem ridiculously happy each time Ross and Finch and their offspring arrive to crowd the place.

A moment please, I must rest after all that.

Did I tell you that one of the flawlessly carved newel posts in the foyer at Number 7 is my retreat? Well, it is. From here, at the base of my miraculous staircase, I observe all comings and goings. I admit that since my wings have matured from buds and are growing a little every day, I am not quite as comfortable as I used to be; the space inside the post has become somewhat snug. Yes, yes, of course I know I should be able to deal with this problem but I can’t ask help in finding out how to make the change and I have had rather a lot of other things to learn.

By gad I forgot Birdie, that wretched, wispy little creature Hester insisted on adopting. The child is audacious but Hester dotes upon her and I suppose the girl dotes upon her, but she makes entirely too much noise. Fortunately she dotes on Hunter and Sibyl and spends a goodly amount of time with them.

Toby! I can’t be blamed if some of these people slip my mind. Toby is Jenny More’s tatty young friend from her days of living in Whitechapel and, yet again, Hester took pity on the clumsy creature. He now lives in the best room in servants’s quarters and is treated like a particularly intelligent pet.

Never mind all that. Forget about it unless one or two of them show up while I’m cleaning up the mess they’ve all made at Number 7. And they have made a mess. Almost nothing is simple.

But I have a plan, the Perfect Plan. My previous attempts to rid the house of Hester’s unbearable lodgers (protogées as she pretends they are) were fraught with obstacles because I had not seen the obvious. Lady Hester Bingham must become a celebrity hostess and patroness in her own right. For this she will need her home to be serene and impeccable. There she will welcome literary gatherings, guide silly girls toward fine matches, and have the ear of every important member of the ton.

There are one or two problems to overcome—:when haven’t there been problems to overcome in this house? But getting rid of Adam Chillworth is my essential goal now, and since the only woman he believes he can love (as if love had anything to do with these matters) is Jean-Marc Count Etranger’s sister, Princess Desirée of Mont Nuages, then that must be arranged.

Since the attic at 7 Mayfair Square would hardly make an adequate home for a princess, I’m sure the girl’s brother—once he stops trying to oppose the marriage, as he most certainly will—I’m sure Jean-Marc will provide a suitably splendid abode and, after all, the Princess herself is to come into a fortune. And if that dolt Chillworth climbs on his high horse and talks about not being prepared to live on his wife, well then, there are ways to force his hand.

I do foresee a nasty conundrum in Hester’s plans to renovate the house. Hunter and Sybil encourage all this, but from what I’ve heard of those plans, well, they must not be carried out and I shall rely upon your eyes and ears and, where necessary, your hands to help me scuttle their vulgar ideas.

The usual rule applies—your mouths are no good to me and should be kept shut.

I’m off to meet someone who will be my right hand in all of this, my earthly helper. In the past my error has been to seek the assistance of empty minds I assumed would be simple to control and guide. Never again. This time I have realized where I went wrong. This time a busy mind will be the weapon against any resistance. After all, doesn’t it make sense that the busy mind of a self-centered person will clamor and scheme with such deafening vigor that my instructions, so craftily introduced, will go unnoticed in the din. Before this indispensable helper realizes what’s happened, the deeds I order will be performed and even then, and with any luck, the arrogant prancer will still be too involved with other matters to notice mine.

It is time to set my plans in motion. Await my dispatches and be ready to act. Soon.