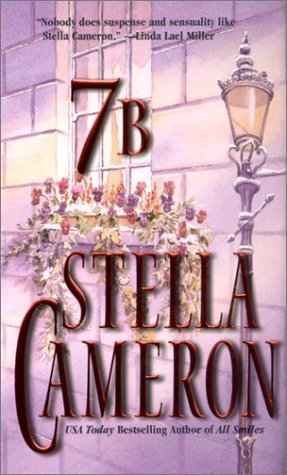 Stella’s Thoughts and Excerpt of 7B

The Mayfair Square series has hooked me. I think I’m going to pop over to London in the summertime this year and do more digging around. 7B is Sibyl Smiles and Hunter Lloyd’s (soon to become Sir Hunter Lloyd) story, but I want to think about a few things for the next MS book. Ooh, I’m so excited about 7B — I just love the old-fashioned gas lamp on the cover. They’ve made the glass look like glass. By the way, I’d like you to imagine a teensy bit more snow on those winter pansies! But let’s think about 7B for now and look at the lay of the land.

Sir Septimus Spivey, resident ghost at 7 Mayfair Square, and incurable meddler into the lives of those who live there, has the following to report on Sibyl and Hunter:

"Females. I should have known that even so placid an example as Sibyl Smiles could become difficult. Her sister, Meg, is a headstrong creature, a daring and unpredictable specimen if ever I saw one. Sibyl is the pale shadow, or should I say that she used to be the pale shadow. I cannot imagine what has come over her, unless it is jealousy of her sister, and a determination to prove that she, Sibyl, is capable of equally flamboyant and unsuitable behavior. Oh I am almost certain she trembles within. I have seen how she gathers courage to embark on each outrageous step she plans, but embark, she does. And what if she accomplishes her aim to achieve independence of the most extraordinary kind? Well, then, I shall not only be foiled again, but doubly foiled again.

"You see, my plan is that at last that cold fish Hunter Lloyd, Hester’s nephew and another unwanted occupant at Number 7, will decide that a man in his position — barrister, y’know, and about to be knighted, although I cannot imagine why — must have a wife and a residence of his own. So, Hunter marries Sibyl. Sibyl marries Hunter. The result is obvious, or so I had hoped."

You see — when he was alive, Sir Septimus designed Number 7 and considered it a crowning achievement. He can’t stand the idea of lodgers living there and is determined to get rid of them by any means.

"I believe Hunter may have noticed Miss Sibyl. His gaze lingers, y’know. But Miss Sibyl’s mind is elsewhere. She is rehearsing; making ridiculous faces in front of the mirror. Practices walking with a devil-may-care swagger. A strut. The silly chit is determined to put on a self-assured air, a worldly air, even. With her newfound friends, a group of drab, bluestocking creatures destined for the shelf, she is devising a plan to obtain what she wants most in life.

"She does not want a husband."

Poor old Spivey, it would be so much easier on him if he admitted he has no idea about the workings of the "modern" mind. Perhaps you’ll understand exactly how determined Sibyl has become if you listen to a conversation she has with her older, married sister, Meg.

Sibyl could not stem the rush of blood to her neck and face. "You are examining me, Meg, and looking for flaws. You’ve decided I’m different, well, the only thing different about me is that I, too, wish to have a baby. Why not?"

Astounded, Meg saw when Sibyl ran out of breath. She slumped onto the chaise and Meg didn’t know what to say — a quiet extraordinary turn of affairs for one who was gifted with quick wits.

At last she recovered a little and said softly, "You are eight and twenty. Hardly ancient. You will have your own children, dearest. Why should you think I expect otherwise?"

"I’m tired of waiting," Sibyl said. "There is no eager husband panting to sweep me away. I do not grow younger. The time for me to bear children is now, and that’s what I’ve decided to do . . ."

Unwillingly, Meg made herself consider what Sibyl had actually told her. "I will not question your sincerity in this matter," Meg said at last. Perhaps she had misunderstood Sibyl. "You have met someone who has asked for your hand. You do not love him, but you have accepted him because you want a child at once. That is what you mean?"

"No." There was only determination in Sibyl’s tone. "There isn’t a man in my life, yet."

What Sibyl hasn’t told her shocked sister is that a man has been selected, the only man Sibyl can imagine approaching with her wild request — and she does intend to ask him, in a most straightforward manner, to help her achieve her heart’s desire.

"Is this a bad time?" Sibyl asked, entering Hunter’s rooms as soon as he called for her to come in. "I apologize if it is, but I have something to ask you and I want to do so before my courage deserts me.

"I was only joking, of course." She smiled and played casually with he double ruff at her neck. "Courage isn’t likely to desert me, not when I ask a favor of a dear old friend."

"Glad to hear that," Hunter said, but felt unaccountably disquieted by the impression that she had either become more bold, or was pretending to be.

Hunter already has an inkling that something is different about Sibyl. What follows is extraordinary. Sibyl bungles her request, giving Hunter the impression that she intends to go to the Continent and simply "find" a man to become her child’s father. For her part, Sibyl is embarrassed by her own awkwardness and decides she must "get on with it."

"What I require cannot be accomplished without a man." The next breath she took was so hard. She would tell him what she would like, tell him straight. "What could be better than to know the father of one’s child is an honorable man, a man one likes so much?"

This was an encounter Hunter would never forget. "Certainly sounds like an absolute requirement to me." She had no interest in a husband, but he would save her from herself, no matter how difficult that proved.

Sibyl could scarcely hear for the pounding of her heart. "Then we are agreed. Surely you know the man I would choose, don’t you? There is only you who could be the perfect one. Will you do this for me, Hunter?"

As you see, this relationship is off to a most unusual start. Perhaps you think Hunter will turn Sibyl away and everything will fizzle. Or that Sibyl will change her mind and return to her usual, sensible self. Well, I’m very sorry, but for Hunter Lloyd and Sibyl Smiles, nothing will ever be the same.